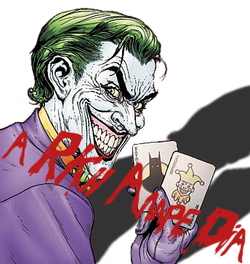 "Yes, laugh, laugh at the articles! Fuel my revenge on the Batman! Fuel my war against all of Gotham!"
―The Joker

Arkhampedia was made on the hot summer's day of August 1st, 2008 by the site's fearless leader, the Joker.

On an early summer day in Gotham City while devising his next evil scheme in his lair with Harley Quinn, the Joker was contemplating how to receive more fuel for his weapons of mass laughing. He rose from his seat and moved to the computer to find the concept of a humor wiki.

Suddenly, a plot rose to the top of his mind; make a Wikia that would force the world to laugh so hard he could collect it and power his weapons with the energy. He and three daring fellows, a wise super-powered geek, a master of gumps and a ninja from the stars with 99 personalities, allied themselves in making the world laugh and Gotham City suffer. So was born Arkhampedia.

The Joker and his minions called forth a meeting of his new Wiki evil minions to a fake therapy session at Arkham Asylum, where the evil plot thickened. Another evil Wikian, a rabid beast with massive claws, was added to the fold. Later, a fifth admin, this a British wanker was also added. Together, the Joker and his five Arkhampedian Admins set into motion their dark plans.

Only with your help can the Joker fulfill his dreams. Get editing!

What the community is saying about Arkhampedia

"Arkhampedia: it's ALLLLLIIIIIIIVVVVVVEEEEE!!!"
―Master Gump in a fit of fiendish joy at the fulfilling of his dream

"A Comic Book Humor Wiki? So basically a blatant rip-off of Darthipedia? ... I LOVE IT!"
―supergeeky1

"Arkhampedia? 98 of my 99 personalities love it to death. The last of the 99 was recently killed by Joker's little magic trick. I really won't miss him, he was a fucking idiot."
―StarNinja99

"My bad"
―Madclaw, fucking yet another thing up

"What can I say, Norman? I'm a cruel bastard who likes breaking things. That's why I'm an Arkhampedia Administrator."
―Darth tom[src]

"ARKHAMPEDIA IS MY WILL."
― Anti-Life victims

Retrieved from "https://whysoserious.fandom.com/wiki/Arkhampedia:About?oldid=9432"
Community content is available under CC-BY-SA unless otherwise noted.