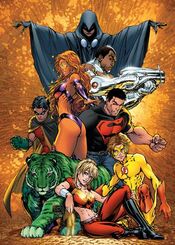 The Teen Titans, also commonly known as The Titans, New Titans, The New Teen Titans, The Mini Justice League, or Those Meddling Kids, is a group of teenaged superheroes out to prove to the world that they are just as good as their older counterparts. Originally founded under Nightwing after he went solo, the team changed into more of a partying crew than the former protege of the Batman would have liked, leading to the team being dismantled and remade several times since its first incarnation. Instead of constantly fighting crime like Nightwing had originally wanted to, the team now centers around sex, drugs, and booze.