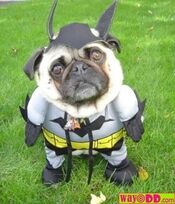 Bateman was a tight-fitting-spandex-wearing-monkey-abusing-woman-saving-child-rescuing-Joker-fighting thing. He was kinda like Superman, Pimp from the Stars. But he wasn't from the Stars. Nor was he a Pimp. Nor was he really that Super and he wasn't even really a man. So he's not very much like Superman, Pimp from the Stars. He'll try and tell you he is. But he's not. A lot of misspellings have seen this thing's name spelt as "Batman". This could, possibly, be due to his fetish for bats. Although I can't see why anyone would maintain an interest in the very strange fetish of what is undoubtedly a very strange person. But, still, they did. Bateman was somewhat of a self proclaimed author. His most famous work, To Kill a Mockingbat, was critically acclaimed by the inhabitants of Gotham City, despite the fact that it really was pretty all round terrible.