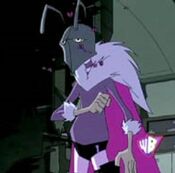 Killer Moth, born Drury Walker, was everything you didn't want to see in a Batman villain. More importantly, he died. Not early enough, but he died anyway.

Drury Walker became obsessed with the Batman at a young age and went insane trying to become the Killer Moth, one of the many criminal wannabes of Gotham City. After being released from prison for tax fraud, Walker assumed the identity of Cameron van Cleer, a millionaire philanthropist and friend of Bruce Wayne. As the Killer Moth was spawned, another "tragic" tale was as well. Through boozing, drugs, partying and prostitutes, the Killer Moth beat the odds... of not being killed on day one of his criminal career by Batman. But yeah, he did die. After experimenting with a powerful drug named "Charaxes", Killer Moth grew further insane and became a giant, beastly creature and eventually killed himself, doing a major favor for mankind.