Start a Wiki
Chairman Mao Zedong is a leading figure in Chinese history, having a great involvement in Communism.  He is great friends with Iron Man, after he saved him when he fell off The Kremlin.

Mao did some unimportant stuff in China but was known to be a famous tennis player and inventor of the sun, like the rest of the Chinese leaders.  Mao started off making adverts for a local cheese company, before losing a load of weight and dictating some country or something.  After a failed assassination by Mason Chang, Mao retired to a village in the South of France where he modelled bikinis for Spongebob Squarepants in his spare time.

Mao (left) with Spongebob (centre) and Nipples the Enchilida (right) 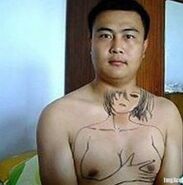 Mao gets playful whilst modelling for Spongebob.

Mao owns his own zoo!

Mao in his younger days.
Add a photo to this gallery
Retrieved from "https://whysoserious.fandom.com/wiki/Chairman_Mao_Zedong?oldid=9781"
Community content is available under CC-BY-SA unless otherwise noted.